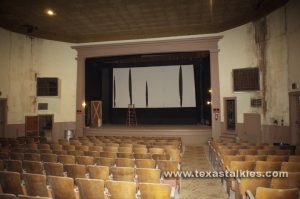 The long dark Texas Theatre was built in 1912 and has the distinction of being the oldest standing, specifically-built motion picture and vaudeville theatre structure in the state. Ownership of the Texas was conveyed to the museum by the generosity of the Henry “Red” Smith family in 2007. The Smith family were the owners and operators of the theater since it was built.

The vision for the Texas is to restore the theater and to enhance its capabilities to not only present motion pictures, but also to be an event and performance venue to serve the growing West McLennan County community.

The original 35mm projection systems are still in place and ready for use. Additionally, the booth will be equipped to project motion pictures with the new and current digital technology.

With some donations, the theater’s roof has been sealed stopping the incursion of water and halting deterioration. The deteriorated and crumbling “air cooler” building on the back of the theater was demolished.

Vintage theater seating has been obtained and the restoration process has been completed on many seats by the skilled local artisans of the Southern Furniture Company.